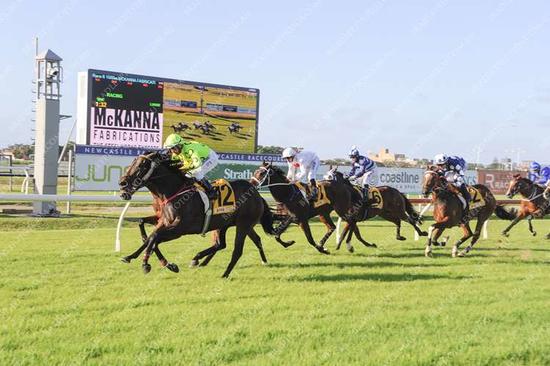 Thanks to Hawkesbury Race Club for this great report.

When Hawkesbury trainer Wanda Ings didn’t have a suitable horse for her home track stand alone meeting yesterday, she took the next best option and headed up the freeway to Newcastle, making sure she avoided speed cameras on the way.

The trip proved worthwhile as Ings landed her first winner of the season when her four-year-old mare Speed Camera shed her maiden status at her 12th start.

Putting five minor placings behind her, Speed Camera ($11), with Chris O’Brien aboard, overcame difficulties to come from last and overhaul fancied pair Cottenham ($2.90 favorite) and The Summit ($4) in the Maiden Handicap (1500m).

Ings became the 21st Hawkesbury trainer to win at least one race this season, and was understandably delighted to break back into the winning list.

“It’s been so quiet; I was beginning to think I had lost it,” she quipped. “But I have tipped out a few horses recently and now have 12 in work.

“I’ve got three very nice unraced fillies by Hinchinbrook, Epaulette and Albrecht to come into work. I’m trying to finalise syndicates to race them.”

Ings purchased the well-named Speed Camera (out of the Don Eduardo mare Pictures Of You) relatively cheaply at one of the last sales at the old Newmarket complex because she is an unabashed fan of her sire Smart Missile .

“I really like Smart Missile; I think he is a super stallion,” she said.

“After finishing third at Kembla Grange in early March, Speed Camera had a meltdown at her next start at Hawkesbury in a 1600m Maiden in March.

“It was really surprising because she is relaxed at home.

“I backed her up eight days later at home again over 1500m and she didn’t race well either.

“I decided to take her away from home and she performed much better when fourth in a 1400m Maiden at Newcastle (beaten less than two lengths) on April 13.

“Chris O’Brien rode her for the first time then and said afterwards he thought he could win on her next time.

“I put winkers on her yesterday because she hasn’t been concentrating 100 per cent, and I’m sure they had a positive effect.”

Ings said Speed Camera was still learning and would like to find another suitable 1600m race before possibly stepping her up in distance.