Prince Memnon makes it 2 in a row 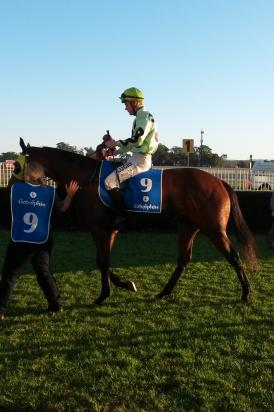 On Sunday 12th June Prince Memnon took another step in his development as a racehorse. Racing in a 1300m Benchmark 60 Handicap and ridden by top apprentice Rory Hutchings "Todd" beat a strong provincial field of 14 runners to win by half a length. The pleasing aspect of the win was that he got away well and raced inside the majority of the field until well into the straight when Rory took him wide, found clear space and "Todd" did the rest finishing strongly down the outside.

It was great to see all his owners, family members and supporters at the track to see this promising gelding strut his stuff. I think most of us are now coming to the realisation that we might have a serious racehorse on our hands.