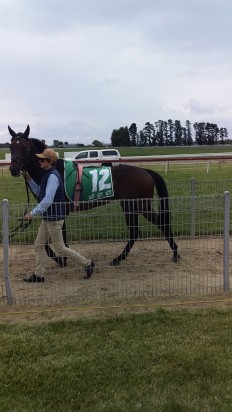 23/2/22 - not disappointed with her 5th placing at Orange last Saturday where she hit the line well despite not wanting to go up the inside of horses - may have been a consequence of her previous start at Bathurst where she copped a fair bit of interference. Looking to give her a short break and hopefully come back with a different attitude.

17/2/22 - really happy with her work and she's improved heaps. Will go to Orange on Saturday 19th February for a 1600m Maiden Plate where Chelsea will ride from barrier 3. Happy to have her back to the 1600m as the 1400m of her previous run were probably a bit short of her best.

9/2/22 - pulled up well from her 7th placing at Bathurst on Monday after blowing the start and having a checkered passage throughout. Only beaten 5.5lengths and jockey Adrian Layt was full of compliments on the run. She's still got some learning to do though.

27/1/22 - pulled up good from her 8th placing at Bathurst on Tuesday where she over-raced quite badly. Chelsea feels that she's best not to race on her home track as she tried to get back to the stables during the race !! Will look around for something for her in the next couple of weeks.

19/1/22 - pulled up good following her last start 8th at Canberra last Wednesday over 1400m but needs it a bit further. She's been nominated for a 2000m Class 1 & Maiden Plate at Bathurst on Tuesday 25th January and we feel the step up in distance should suit - allows her to settle and put in a kick at the end.

30/12/21 - pulled up good from her last start 10th at Orange on Tuesday over 1400m. Happy with the run and looking to nominate her for Canberra on 12th January. We think pretty highly of this Smart Missile mare.

15/12/21 - happy with her 5th of 11 runners at Canberra on Sunday and she's coming to hand nicely. Looks like our patience is starting to pay off with her. Pulled up well from that run.

7/10/21 - has come back in from a short break in fine fettle - the little rest has done her the world of good.

22/9/21 - still very green and seemed a bit lost at Narromine last Thursday where she finished 10th of 12. She's having an easy week but we're keeping her rolling along.

15/9/21 - this daughter of Smart Missile will have her first start on Thursday, running over 1100m in a Maiden Plate at Narromine. She's been pretty cool and casual each time she's been to the trials and this run should give us an idea of what she can do.

9/9/21 - making great progress and will be nominated for an 1100m race at either Narromine next Thursday or Orange on 20th. We expect her to be hitting the line strongly in whatever race she starts.