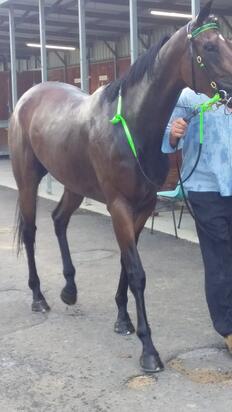 15/12/21 - really disappointed with "Bella's" 8th placing at Canberra last Sunday and she just doesn't seem to want to put in. We'll put her up for auction with Bloodstock Auctions tonight and see what happens. If she doesn't sell I'll look to give her 5 months in the paddock to get her head together. Last resort for her! She still looks a million dollars though so it's a bit heart breaking to see her recent form.

1/12/21 -  really happy with "Bella" at the moment - she's behaving herself and relaxing better in her work. She'll head to Mudgee Friday 3rd December for a 1500m Maiden Plate where she will be ridden by Chelsea and has drawn barrier 3. We think the distance should suit.

7/10/21 - "Bella" will also go to Forbes on Saturday for a Maiden Plate over 1400m where she will be ridden by Chelsea from barrier 11. Really happy with her and she's enjoying her work - we even put her over some small jumps during the week to change up her work. We're using this race as a stepping stone to a next start at Narromine on 16th October. We also hope that this is a bit of a "confidence" process for her as she still needs to learn how to let down in her races.

22/9/21 - has recovered from that horror run at Dubbo a couple of weeks ago and has been working great. Has been nominated for a 1400m Maiden Plate at Bathurst on Sunday 26th September. She's also settled back down in her work after that slight setback.

15/9/21 -  "Bella" pulled up very sore after her 7th placing at Dubbo on Sunday where she was restrained quite forcibly after jumping which seems to have damaged muscles high up on her neck. The chiropractor has advised daily massages and some medication to help her recover but it will probably be 2-3 weeks before we get her back to the races.

9/9/21 -  "Bella's" work has been great including some lovely work this morning. Will head to Dubbo on Sunday 12th for a Maiden Hcp over 1400m where she will be ridden by Chad Lever from barrier 12.